Hooray! Two important milestones for the PNG University of Technology

(See my interview on EMTV on 28 November 2017. See my earlier post on why the PNGUoT is the premier University in PNG.)

1) The Auditor General's report carried out by an independent auditor on our 2015 accounts was clean and did not contain any qualification. The first time in over 20 years! We are now part of that handful of state agencies that received an unqualified report on our accounts.

In only 5 years, under the leadership of Chancellor Sir Nagora Bogan and myself we moved from being the very worst in the country (an adverse opinion in 2012 for our 2006 accounts) to being among the best. UNITECH has not received an unqualified opinion from AGO in over 2 decades. The last time was probably under Vice Chancellor Moseley Moramoro in the early 1990s.

I wish to thank in particular the SRC of 2012, and especially its President Joe Kaowai, who started Council reform and was insistent that our accounts be made transparent and our books be balanced. Also the SRC of 2014 with President Eddy Nagual, who insisted a legitimate university Council be re-constituted again under the leadership of Chancellor Sir Nagora Bogan.

Furthermore, I wish to thank for their accounting work and for enforcing financial controls the internal audit unit Noah and Elizah, Bursar Diraviam Tharmaraj and his team and the financial advisor David Johnson of Karama Ltd in Lae.

2) The good news does not stop there. We also managed to balance our accounts for 2017, if (and that is a big if) the government is able to transfer the outstanding amounts for this year. All major expense post have been coming down from 2015 to 2016, and now again from 2016 to 2017. Our project cash flow shortage this year is about K14M which is exactly the amount the government still owes us.


The PNG University of Technology is finally emerging from the shadows and is now again in the realm of financial respectability. We can not imagine the Council would want to change course, and eliminate progress made.

We are also hopeful that our progress in improving the academic quality of all our programs will now be matched by the necessary investments and stronger support from all stakeholders.

The PNG University of Technology seems to be emerging like a phoenix from the ashes. Over the past 7 years we made substantial and eye catching investments in campus infrastructure.

Next year, we hope to finish replacing the buildings that were destroyed in the arson attacks in 2016, and start building our planned small solar power plan to ensure our lights and internet stays on by starting on the Uni-City, a smart eco-city development in the southern part of our campus (see http://www.unitechpng.com). We are committed to carry out this process in order for the university to depend less on the state grant, and diversity its revenue.
Post scriptum
Of course the University Council, Management and some corrupt staff did not like my efforts to achieve financial transparency and accountability, and started to gossip and spread a big lie (no doctorate) plus many smaller lies about me. Dr. Renagi, who is a nephew of the infamous Minister Puka Temu, an O'Neill crony, stood everything to gain.
Scholars at Risk in New York City, however, could not be fooled. They demanded I would be restored in my position, as you can read below. Although in th end, I was unlawfully denied a judicial review, I was able to sign an amicable agreement with the University Council, and finally received at least part of my back pay since 2015. In all this, there was direct interference by Peter O'Neill with the police and the judiciary.
Regrettably, upon transiting through Port Moresby, I was arrested on the basis of the same false allegations of 2013 by Mr. Ralph Saulep. These allegations had already been set aside by the investigation led by Judge Mark Sevua who had scolded Saulep severely for his madness. In May 2018, however, my passport taken away by corrupt police, who were being paid by Saulep.
With my wife, I was held hostage for over a month by a cabal of corrupt lawyers who knew I had access to money. Although in January 2019 this frivolous case was eventually thrown out, I left the country penniless after working so hard for the University for over 6 years never having received my full salary.
My Vice Chancellorship was excellent for the university finances, but ruined my family's finances. Why? 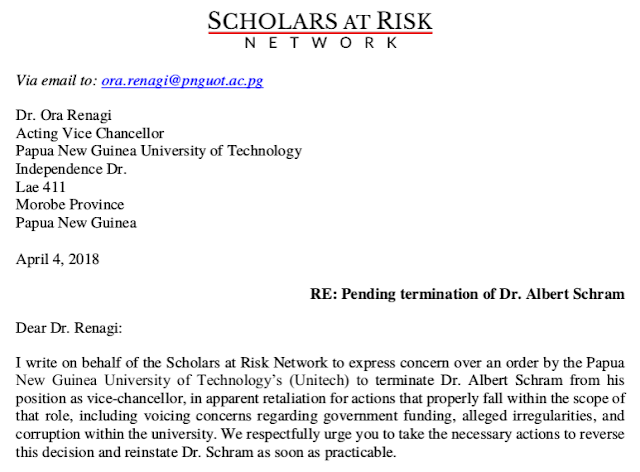