Let me wish all the good people of Papua New Guinea a happy 43rd independence day celebration with their families.

Not wishing to put too much of a damper on the celebrations, let me use this occasion to share some present and serious concerns about this government's management of the national economy.

As an economic historian concerned with long term economic growth and development, and an avid reader of the reputable national and international press, as well as specialized economic analyses regarding the country's economy, I feel I must make my voice heard. When things go south in PNG this year or the next, nobody can say I kept quiet.

Let me make clear that I am not a doomsayer or thrive on negativity. Earlier in 2015, I argued in a public lecture at James Cook University, for example, that if PNG can keep up an economic growth of 5% per year, and a GDP per capita rate of 2.5%, the goals enshrined in Vision 2050 of PNG becoming an upper-middle income country, with a large and educated middle class can become reality. Sadly, today it is clear that even this modest growth has not been achieved over the last 6 years, and probably won't be achieve in the near future.

Hopefully, economic policy can still turn around from being silly and wasteful to intelligent and productive. In order to avert disaster, however, a fundamental change in the thinking of the current economic team, or a change of the economic team will be required.


It turns out that the Prime Minister in his New Year's address in 2015 was seriously misguided. He said: “In particular, while the price of oil has dropped in recent months, for the most part this will not overly affect LNG revenues as we have forward contracts in place that are set at fixed pricing formula." Anyone who know how oil markets work, knew this is nonsense. Something similar occurred this year, when the news broke of the recent polio epidemic, the first reaction of this government is consistently to put its head in the sand.


On economic growth the Prime Minister Peter O'Neill said “The economy has been growing at around 8% per annum and this positive growth will continue. Inflation is steady, interest rates are steady, our foreign reserves are very high with enough in reserve to cover six months of imports, and employment levels continue to increase."


The truth is very different. Only in 2011, before this government took over, was economic growth per capita (corrected for population growth) was not anything near 10%. Afterwards it has plummeted and the country was in a severe recession in 2014 and 2015, as all the country's inhabitants were able to notice.


Since 2012, formal employment has consistently gone down, which is discouraging for the young school leavers or university graduates entering the job market.

Another reality is the uncritical media coverage of all this in PNG. As a result PNGeans do not see the connection between economic policy and the reality they experience. National economic policies are mostly incomprehensible for them due to the average low number of years of formal education. Only if it affects their own tribe or village, will they make themselves heard. For example, people wrongly belief that strong Kina and less trade, means a stronger economy, while in fact we know the opposite is true. Devaluation can drive exports, and trade is strongly related to successful and growing economics. On National EMTV news, however, the dogma is repeated every night that the Kina value is unchanged supposing this is a good thing. So if it is unchanged, how come the Kina's value has been steadily going down?

In my personal view, the response of the students in 2016 was driven as much as by specific grievances, as well as by their parents' and sponsors' suffering because of the recession and famine in some highlands regions in 2014 and 2015. At some point, the World Food Program had 250,000 on food aid.

When in 2016 the students at the University of Papua New Guinea in Port Moresby, and the PNG University of Technology in Lae demanded the Prime Minister's Peter O'Neill resignation, in his response he boasted that PNG economic growth would continue in double digits (over 10%).

When the students did not believe him and continued their peaceful boycott of classes, on the 8th of June 2016, the police shot dozens of rounds at the students on the UPNG campus. This also happened to be the last day the opposition was allowed to file a motion of no-confidence. In Lae, on the UNITECH campus we were able to avoid any violence thanks to the courageous intervention of the MetSup Anthony Wagambie Jr. The promised investigation never happened, and it is now 830 days and counting.

My bet is that even after 1,000 days nothing will have happened to answer the questions: who gave the orders? What were the orders? Why were special police forces from the highlands on the UPNG campus? Why on this day when Parliament convened for the last time, and the opposition could still file a Motion of No-Confidence? Who pulled the trigger?
Meanwhile, the students' voice at the largest public universities has been silenced. The Students Representative Councils at UPNG and PNGUoT have been suspended indefinitely, and despite promised no election of representatives of the whole student body have taken place. This is a matter of concern, since as one of the over 800 signatories of the international Magna Charta Universitate, the PNGUoT is supposed to have students involved in university governance.


Last month, the government of Papua New Guinea has decided to give itself a birthday gift by trying to issue a US$500 million bond so as to finance its debts.

Most analysts agree that this is too little and too late to cure its financial ills. Moreover, the timing for going to the market could not be worse. Because the US Federal reserve bank just increased it interest rates, in these months investors are bringing back their money from emerging markets to the strong US economy . The fact that Argentina is on the verge of default (again), and Turkey is struggling with high inflation and devaluation of its currency, makes investing in emerging markets at this point not only highly risky  but also unattractive.

What I gathered from the reputable press and  other writings by specialized economic analyst, the situation is dire. It was well summarized by Gary Kleiman in the Asia Times on 14 September 2018, and I quote: "In 2016 the World Bank lent $300 million, and double that amount is owed China out of the $2.5 billion foreign debt total. Prime Minister Peter O’Neill and his economic team have scrambled to deal with declining revenue from Exxon Mobil’s flagship $20 billion gas plant, and severe drought and earthquake in succession. "

"Fund outflows persist for both debt and equity, which have each fallen below $20 billion in the latest data from US-based EPFR (Emerging Portfolio Fund Research in Cambridge Mass.). Standard & Poor’s recently lowered the sovereign rating to “B,” citing over-dependence on hydrocarbons and mining industries, “weak institutions” and fiscal and monetary policy rigidity. Moody’s placed it on negative watch, and the downgrades overshadowed favorable publicity as the upcoming host for November’s Asia-Pacific Economic Cooperation (APEC) summit."

The article hints at the real reason for the desperate attempt of this government to get another loan now: "With the planned 10-year external bond the government intends to extend maturities, while preserving the country’s no-default record." So if the bond issue fails, the country might default on its payment to existing loans? Even worse, if it succeeds, until when will PNGeans take to repay this debt with such a high interests?

The "stability" of an illegitimate government can only be fleeting. The members of this government know this, and privately some have made arrangements in the case the economy collapses, food riots break out, and they would have to leave the country in a rush.

With all these negative developments, it is no surprise that the legitimacy of this government is again in question. It was never very large to begging with but the fact that they can perpetuate their power seemingly endlessly is now a reason for concern. The 2012 elections were a shambles, and for a while there was a situation when there were two Prime Ministers, and a lot of confusion.

The 2017 elections were even more irregular but were prematurely called "successful" by the Australian foreign Minister Julie Bishop at the time, but she is no longer in power. Meanwhile, the election related violence has continued until today, though in Southern Highlands and Hela Province, and part of Enga Province it has morphed into a situation of complete lack of law and order, and general lawlessness.

When odd things happen in PNG, the explanation is that other forces are driving developments, mainly the all pervasive, blatant and fantastic corruption, which was characterized by former PM Sir Mekere Morauta as "systematic and systemic", is now according to him "ordered and structured". The Independent Commission Against Corruption (ICAC) promised in 2012, meanwhile, remains a distant dream, despite the hard work of the lawyers in the various committees.

The Secretary/CEO of the Constitutional Law Reform Commission, Dr. Eric Kwa said in November 2017 at the Australian National University: "In my view, the most critical goal at the moment is to establish ICAC and get it operational. The Constitutional Amendment establishing ICAC is already in force. PNG needs only to enact the Organic Law on ICAC to fully implement and operationalise ICAC. It is encouraging to note that the Government is serious about ICAC and wants to see it established sooner rather than later." Does it really? The absence of the ICAC is meanwhile is the elephant in the room everybody tries to ignore, but can't.

Meanwhile, many  PNGeans in Port Moresby are trying to believe the government's propaganda and lies about the economy, against better judgement. Many are waiting patiently for the moment when the promised benefits of the Pacific Games, and APEC public infrastructure - the largest white elephant projects - will materialize for them, and some have even joined prayer groups and fasting for the success of the APEC meeting. For the builders and the cynical politicians the benefits have already materialized at the signing of the contracts and the other agreements.

Last time, I checked the swimming pool built for the Pacific games in 2015 was unusable, and the stadium built for the opening is still only half finished. 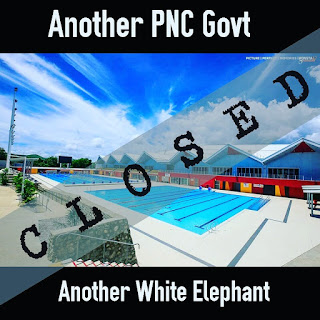 Let's hope the APEC infrastructure will indeed become a thriving conference center. For the 80% of PNGeans living outside Port Moresby, however, who can never afford the inevitable airline ticket, even those hopes are absent. They will believe what they see in the newspapers and on television, but still wonder why they are not included or invited to this party.